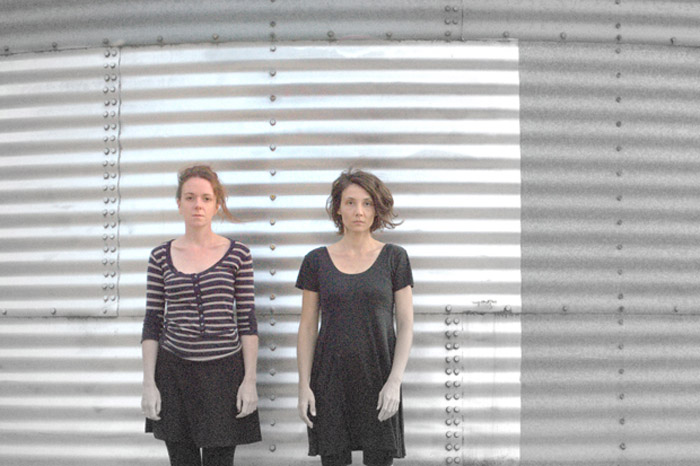 The minimalist assemblages of samples, cello, percussion (a banjo turned into a drum), synth can be sweetly poetic but also humorous and joyously abrasive; ‘You Smell’ opens with the delightful line “you’re a fucking asshole piece of shit.”

Hidden people was born in 2016.
The duo released their first album Tambour cloche in 2018 and released their second album Comment s’étaient-ils rencontrés? in October 2021.

These are songs with everything you can put in them: lyrics, sounds, timbres, funny, startling, suspenseful. There are those that have been lingering in the back of our throats for too long, those that knock on doors with insistence, those that are happily caught on a path. Words spoken or sung, like nets to which one can cling to tell stories.
The music of Hidden People is woven like a thread stretched between several spaces that silently co-exist. None of them has the same shape and the people who live there do not have the same trajectories. They intersect very far from the usual, all there in their singularities and their laces.

With a cello that wanders between the acoustic and the sound treatment, a drum full of percussions and prepared with a bass banjo, a synthesizer that likes to tint what it touches, and two voices that sometimes merge, acoustic and electronic mix in dreamlike spaces in which we are not sure of anything, neither of the place, nor of the temporality. Each song is a door that we push with curiosity.

Some say:
“Witches! Small incantations for cups, spoons and fruit trees that bend under invisible rains. When girls walk through the city in great pomp, the horse’s snippet under their fingers. It’s beautiful!”

Bout de temps is a song sung by the duo Hidden people, a group from Lyon, supported by the label Dur et Doux. We can hear a cello, a drum, a synthesizer and two female voices. The Hidden people do not prevent themselves from anything and their music is free and...